War of Gods was designed by Red Tiger, and it shows. The standard of design that this developer got us used to is very high, and it got them a lot of attention from players and the rest of the industry alike. You see it in the details included in this war-themed slot machine, which focuses on deities of Ancient Greece. Zeus and Hades are the ones which get the main roles inside.

The list of symbols has Zeus for one, along with Hades, these being the feature triggers. Regulars will have the image of a Helmet, a Shield with Spear, Drinking Horn, and Paper Scroll. The four card suits are the last four symbols offered by the game.

Red Tiger is the one behind War of Gods. This company is currently owned by NetEnt, but that didn’t mean as much of a change as you’d imagine. They created excellent designs for their slots even before the acquisition. 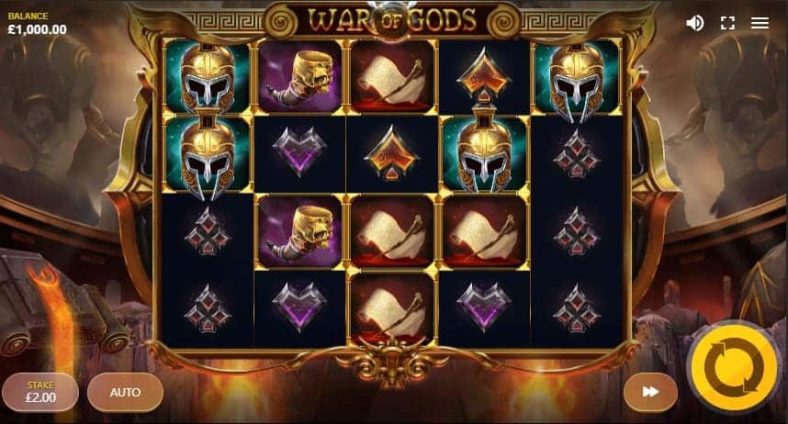 How To Play It War of Gods Slot Machine

This game offers 5 reels, on which you will find 45 active lines. 3, 4 or 5 symbols, landing on active lines and from left to right, will end up getting you paid. It’s a common setup for this kind of slot machine, nothing too special there.

As for the special features that you can find in this slot machine, those will come from the two deities and main feature symbols.

One option would be to get two symbols with Zeus at the same time, on reels 1 and 5, which is going to get you access to a feature called Wrath of Zeus. In this mode, you are going through respins in order to collect more Zeus icons, besides the triggering symbols which are sticky. Up to 3 upgrades are possible for Zeus, in this mode. Zeus can also expand and take over entire reels. If you keep getting new symbols, the respins continue.

Another would be to trigger Hades Hellfire, which of course needs the Hades symbols landing on the 1st and 5th reels. It’s the second respin feature, but now you’re going to need icons with Hades landing. It’s got the potential to expand and take over its reels, plus it also has the ability to give the game area a boost, to 7×6 reels and 60 lines.

Warring Gods is the third variant of respins, for which you need Zeus on one reel, and Hades on the other (reels 1 and 5 get them). In this version, the other two types of respins are combined, so the potential is higher. The game area can expand, there are expanding symbols, more lines active, and symbol upgrades.

2,518x the stake is not a big prize to get, and since the slot’s volatility is high, that payout is particularly disappointing. 95.66% is the RTP, and that is a low figure as well, and it partially explains why the game can’t do better payout wise.

Overall, I found the game to be OK for someone that is really into Hold and Win style features, which have become popular in recent years. It doesn’t have enough features overall though, the RTP is low, and the payouts are disappointing, so there are good reasons to skip it as well.