One of the most modern themes that you could choose for a slot machine, has been implemented in NFT Megaways in the form of an 8-bit style design, which is quite appropriate. We’re looking at a number of characters that represent NFT’s, unique Punks that could be used as digital investment opportunities in today’s world. It’s a trend and a technology that has gotten huge numbers of fans over the last few months, and Red Tiger is riding the wave with a new slot machine, the first one to cover this particular theme.

The four Punks are some of the symbols that you can get, though only on the Crypto Punks Bar, which shows four symbols at the top of the regular game area. Besides these wilds, you also get symbols with the Crypto Spins scatter, the Diamond Hands, and four symbols showing images of a Shiba Inu, Mona Lisa meme, Twitter bird, and Tesla’s upcoming SUV. For the lowest paying symbols, there are images of four cryptocurrency logos, including Bitcoin, Litecoin, Dogecoin, and Ethereum.

Red Tiger, the developer behind NFT Megaways, should be a familiar name for someone that has played slot machines in the past. More than 200 online slots have been launched by them in the past, and while some of their earlier titles were fairly simple and using a lot of random features, they always had great designs, and that got the attention of players and other companies. They were acquired by NetEnt in recent years, and they’ve improved their content further since then, as NFT Megaways proves. 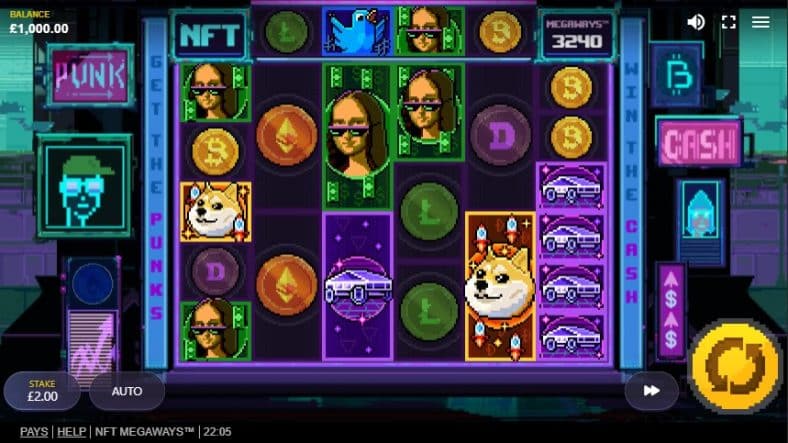 You start playing as soon as you’ve selected the bet. The lowest value possible is $0.10, while the highest is $20.

Its theme might be original, but the setup is one that you’re likely familiar with. 6 reels will provide you with up to 200,704 ways to win, using up to 8 symbols on its reels (using the horizontal reel from the top of the middle four reels as well). The number of symbols on each reel is random. Landing 3+ symbols, left to right on adjacent reels, gets you a win.

Chain Reactions will trigger after any winning combination is formed. Its name might be different in other games (drops, cascading reels, exploding symbols, etc), but the mechanic is the same. Winning symbols are replaced with new ones, so that you can get new wins (and more reactions as well).

At the top, on the horizontal 4-symbol reel, you can additional symbols. This is the area where you can land Crypto Punks, which come in four versions. These are extra wilds, used as substitutes, but with added abilities.

Provided that you can get one of these Crypto Punks in a combo with a symbol of low value, the latter gets collected and the multiplier of the wild gets a 1x boost. At the end of the feature, the multiplier resets. Combined with top symbols, they get removed through chain reactions, but multipliers could reach 30x (and multiplying each other if several are involved in a win).

There are scatters here as well, and you need 3-6 landing, to get 10 to 25 free spins. You collect low symbols, to give the multipliers a boost, which goes only up (maxes out at 30x) during free spins.

Like a lot of other high volatility games, it pays quite well in a best case scenario, even up to 10,499x the stake. The RTP is a little bit lower than expected, at 95.66%.

NFT Megaways is ultimately a game that covers a need in the market, for original content that follows the current trends. There are few developers that manage to do this and take advantage of what players love, and Red Tiger is one of them.