In a race to deliver as many ways to win as possible, Slot Vegas Megaquads might just be the winner. It uses four different sets of reels for the purpose, though only once they’re united will they offer you all its potential.

The theme is inspired by gambling in general, with a focus on Las Vegas if we go by the buildings shown in the background. Get back to the four sets of reels, and the symbols shown there are all going to be standard options from older slots. This means that you’re going to get Royals from 9 to A, along with higher value icons that give us Purple Diamonds, Red 7s, Blue 7s and Green 7s.

Big Time Gaming is likely the developer with the fastest growing user base in the last couple of years. Their invention of the Megaways mechanic brought them a lot of recognition and appreciation, and once they’ve started licensing it out, it became a huge category of games. They’re still innovating, and the Megaquads mechanic is just one example of a new type of game that they’ve released in the last year. 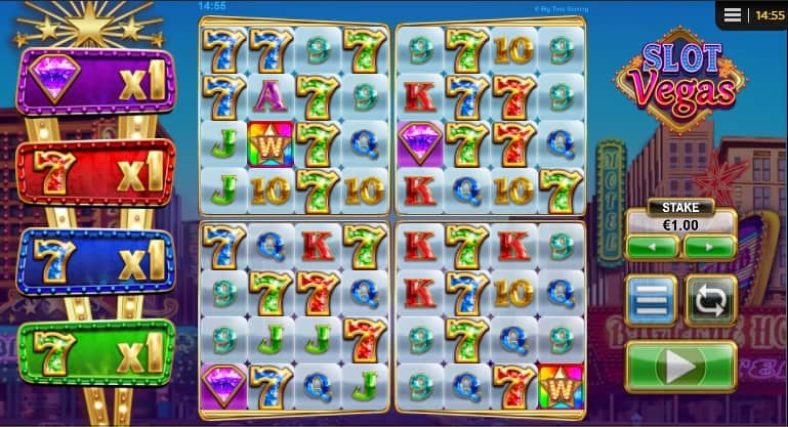 Standard betting options apply, so you’re required to place a wager in a range of $0.20 to $20. It is the standard these days, to give the player a range, rather than the option to change individual line bets and coin denominations.

In exchange, the game will give you access to four sets of reels, each one with 4×4 symbols and 256 ways to win. You form combinations when matching symbols appear on consecutive reels. At certain points, the two reels which are next to each other horizontally can unite, and will deliver 65,536 ways. The free spins can lead to an active game area with 8×8 reels and 16,777,216 ways. You form bigger winning combinations then, and the rewards offered by them will also go up.

As you play the game, and you form winning combinations with high value symbols, you will give the symbol’s meter a boost, and it’s visible on the left side. It’s an increase of the symbol’s multiplier by 1x each time, until you trigger the free spins, at which point it resets.

Among the feature symbols which are in play, there will be two wilds that may help out.

The regular wild is only available on the last three reels of a 4 reel setup. From there, it’s used only as a replacement for regular symbols.

Rainbow Wilds are shown on reels 2 or 3, and they behave in the same way, though they add extra features in addition to their substitution ability.

When the Rainbow Wilds come into play, is if you get them on two sets of reels that are next to each other (either the two from the top or the two from the bottom). A merging of the two occurs, so you get to play on 8×4 reels and 65,536 ways. The middle two reels will get random wilds added to them in this new setup. New combinations of high symbols will give their multiplier meter a boost by 2x to 5x, for 5 to 8 symbols.

Triggered via scatters, the free spins give you 6+ rounds and they’re played on two sets of 4×8 reels (4096 ways each). The collected multipliers can be used now for wins formed with those symbols.

A top jackpot of up to 25,200x the stake can be paid by Slot Vegas Megaquads, a slot machine with very high volatility, but which keeps the RTP in check at 96.59%.

Slot Vegas Megaquads looks like an impressive new release from BTG, a game which pays incredibly well and incorporates fun new mechanics, just what you’d expect this developer to do.