With pink elephants as its main character and symbol, with W logos, but also with high value symbols taking the form of four goats, Pink Elephants 2 is not going to change a lot of things visually. Compared with the original, it’s quite similar, but luckily other departments were improved more. Low value symbols also remain the same, and they sport the images of Royals. 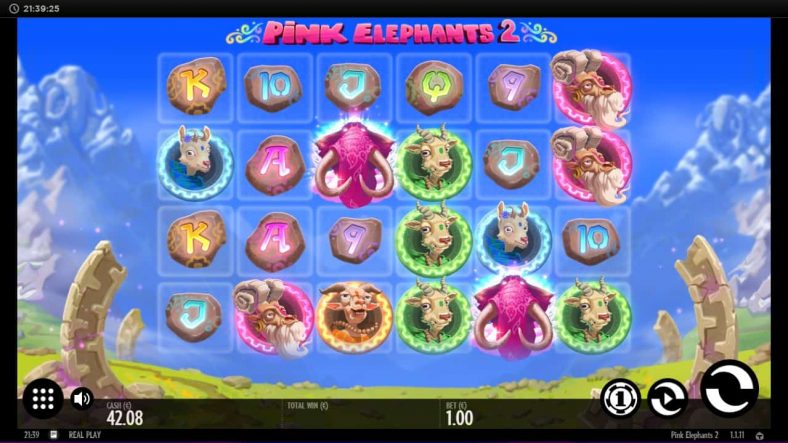 Coming from a smaller Swedish developer, called Thunderkick, this game is part of a series that the company has started a few years back. The features, graphics and even payout potential is very good in a lot of these slots that come from Thunderkick, and I love games like Flame Busters, Esqueleto Explosivo 2 or the Beat the Beast series.

It’s a slot with 6×4 reels and 4096 ways to win, a bigger than average game area, which can provide the player with good top payouts. Those that have played the original Pink Elephants will find a couple of changes here, but it’s mostly a very similar game, definitely not hard to figure out and play.

Quite common in modern slot machines, the wild symbol is going to be present in this one as well, and in a rather basic form. It’s shown as a W logo on the reels, and it’s capable of helping out through the usual means. Appearing as part of other combinations, the wild symbol can be rather helpful, though not in a spectacular way.

Free spins are also very common in games, but while their potential is often beyond what a simple wild can offer, they are also much more difficult to reach. In this game, as in many others, the requirement to get the free spins is to have 3 to 6 of the scatter symbols (Gold Peanut) present somewhere on the reels. In exchange, the reward consists of 7 to 19 free spins.

Another way to get the triggering scatters, is through special Mystery Scatters, which can appear and give you up to 5 of the Peanuts required.

Once you’ve triggered the free games, you will find that some things are different, compared with the base game. For one, Orbs may appear on the reels, which will be collected in special meters, associated with the four top paying goat icons. As each meter is filled, one of the goats will be transformed into the next higher paying icon. Fill all four meters, and then the goat symbols would all be turned into wilds.

To retrigger the free spins, you will need anywhere from 2 to 6 more scatters, and that gets you 3 to 11 more rounds.

Though it might not seem like it, the second game of the series has changed some of its core mechanics and volatility, and then they also improved the payouts as well. Up to 10,000x the stake can be paid in a single spin now, about a 20% increase compared with the potential of the first game.

All the while, Pink Elephants has remained a game with High volatility. Luckily, it also has a good Return to Player, of 96.13%.

Pink Elephants 2 is an improvement over the original slot machine, but not by a huge amount. They made some changes, just enough to make the game a bit more attractive, but they didn’t risk too much in doing so.